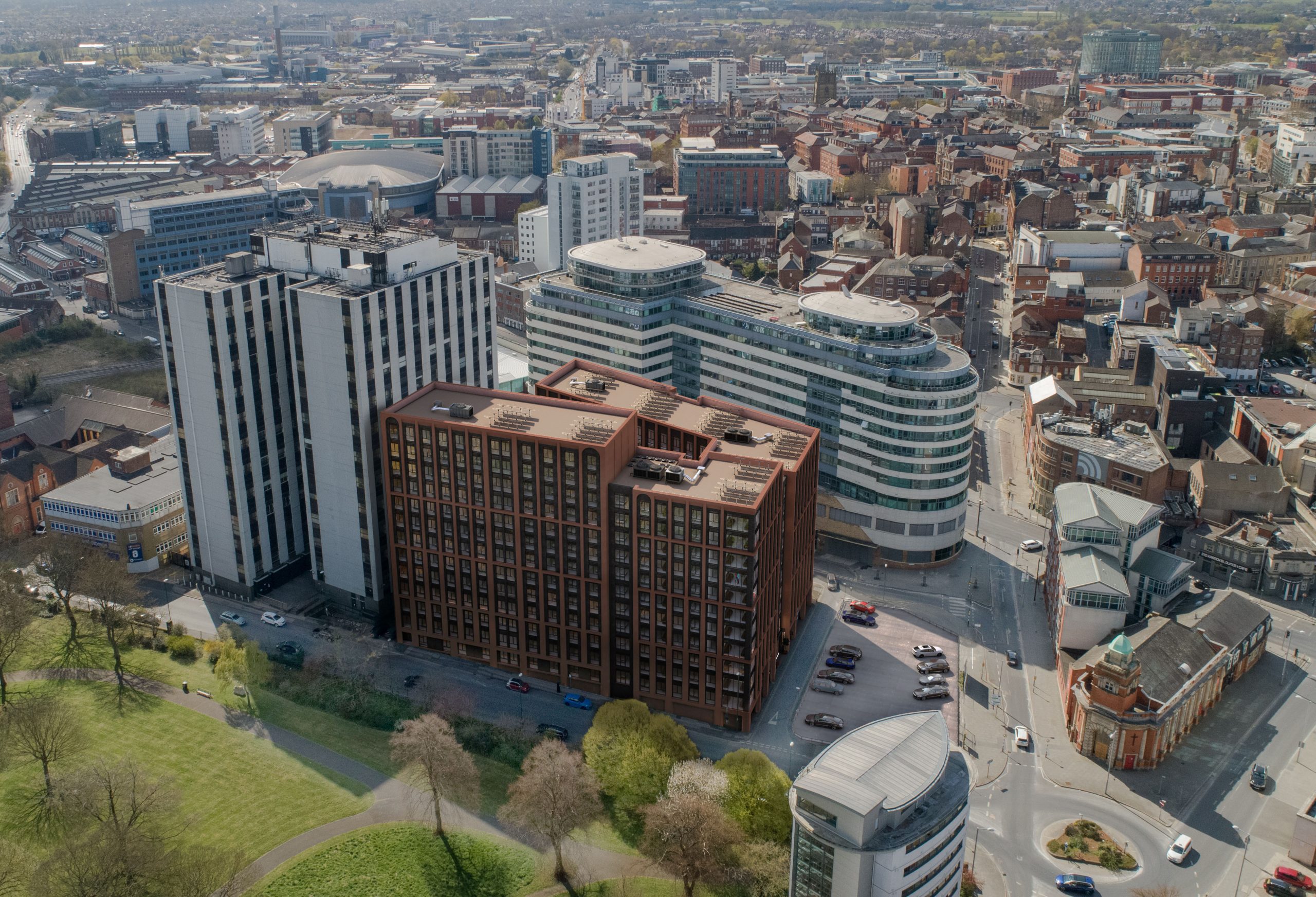 The plans, lodged with Nottingham City Council at the end of last week, propose the demolition of the current disused and significantly degraded building, which has been vacant for nearly 20 years, and the construction of a new contemporary scheme, varying from 12 to 15 storeys in height.

Situated on the corner of Bath Street and Cowan Street, the development – named the Bendigo Building – is adjacent to St. Mary’s Rest Gardens and will consist of a mix of modern studio apartments, four, five and six-bedroom clusters and disabled studio rooms. The scheme will also incorporate a range of indoor amenities such as a spacious residents lounge and reception area, gym, study and games rooms, as well as fully landscaped courtyard garden with outdoor seating, recreational and outdoor exercise equipment, basement parking for 55 vehicles and 312 cycle storage spaces. Two commercial units, located on the ground floor have also been proposed as an additional amenity for residents and the neighbouring community.

The development is conveniently positioned within easy walking distance of Nottingham city centre, Nottingham Trent University, Sneinton Market and the main food and entertainment districts, with the University of Nottingham and Nottingham train station also readily accessible via public transport.

Matt Chandler, development director at Godwin Developments, said: “We are delighted to have reached this important milestone in our proposals for the re-development of this significant site in Nottingham. The city is a key UK hub for higher education, with an ever-growing student population. As a business with a local presence, we recognise the substantial contribution that young people make to its potential. They bring energy and vibrancy to the area, draw in private investment, boost local businesses through discretional spend, support the day and night-time economy, and add to the ongoing city-wide regeneration initiatives.

“With the number of full-time students expected to increase by approximately 28% in the next few years, there is a clear requirement for more dedicated student spaces where young people can live, study, and play together. The Bendigo Building will cater to these needs while also freeing up traditional housing stock, allowing homes to return to their intended family use – responding to the aspirations of many local residents.

“We would like to thank Nottingham City Council’s planning team for their support and feedback with the scheme to-date as well as the local community for engaging with us constructively during the public consultation stages. We’ve also worked closely with our partners – architects RG&P, engineers HSP Consulting and planning experts P&DG – who helped us to shape the proposals submitted last week.”

The well-considered scheme also contains sustainability features, such as air source heat pumps, photovoltaic (PV) roof panels and electric vehicle charging points. It endorses green methods of travel in and around the city by encouraging cycling, walking and use of nearby public transport – all of which promote the health and well-being of students and cleaner air in central Nottingham.

James Mulcare, head of residential capital markets at Godwin Developments, said: “Nottingham is one of the UK’s higher education hotspots with its leading universities attracting a growing number of students year-on-year. In the last few years, the full-time student population in the city has surpassed 63,000 and is growing faster than any other UK university destination. At the same time, independent evidence indicates that there are at least 25,000 young people who are unable to access PBSA – highlighting the robust demand for student living in the city and the clear requirement for dedicated schemes like the Bendigo Building.”

Stephen Pratt, co-founder and board director at Godwin Developments, added: “More and more domestic and international students come to the city of Nottingham, seeking outstanding education and good quality accessible student living. We are confident that the Bendigo Building with its prominent location and high amenities provision will be popular with young people and will deliver attractive long-term returns to investors seeking to capitalise on the strong local PBSA market.”

Once underway the Bendigo Building will create around 300 jobs during the construction phase – and 40 full-time positions when fully operational.

Godwin Developments is currently progressing a number of other residential schemes across the country, including the recently announced 23-storey development in Sheffield city centre, ‘The Meridian’, which will see the creation of a 336-apartment BTR scheme, and the recently submitted planning application for a 116-unit BTR urban village scheme in Ely. The developer is also working on projects such as a suburban BTR scheme in Doncaster which will create 60 BTR homes, as well as two residential schemes in Nottingham which will provide 102 family homes.

For further detailed information on this scheme please email hello@godwindevelopments.co.uk.

Media enquiries can be addressed to Holly Hill at Cartwright Communications on 07738 355 316.